It's here!! Gi60 Theatre Festival on Film is now available On Demand at The Tank, NYC, a home for emerging artists, for four weeks only!

Watch 10 tiny plays on film, with the Bonus Feature of a talkback with Gi60 UK and US artistic directors Steve Ansell and Rose Burnett Bonczek with The Tank's artistic director, Meghan Finn.

Tickets are $5.00 - all proceeds go directly to benefit The Tank, NYC and the incredible work it does for the artistic community. Our great thanks to the playwrights, actors, technicians, directors and staff at The Tank who made Gi60 possible in this challenging year.

Follow this Link:
https://vimeo.com/ondemand/gi60
The Plays on Film:
The Name Game by Adam Thomas Smith - with Chris Donovan and Julie Orkis
Doodles and the Apocalypse by Peter Nemenoff - with Oscar Allen and Ally Callaghan
Brownies by Alex Bernstein - with Ramona Floyd and Mickey Ryan
A Report on Ancient Egypt by Mark Harvey Levine - with Ally Callaghan, Josue Guerrero,
Georgia Pickles, Matty Sangare, and Jennifer Whittaker
Earth People by Matthew Weaver - with Jan Ansell and Mena Ansell
Thanks for Calling by Dave Doster - with Alexandra Slater, Ryan Bannon and Helen Huff
Iceolation by Steve Ansell - with Jay Nickerson and Mickey Ryan
We Need a Little Christmas Now! by Kenyon Brown - with Madeline Thorne and Russ Thorne
A Better World by Maude Lambert and Luca Ansell - with Luca Ansell
Walking by Aurora Stewart de Pena - with Helen Huff, Roger Manix, Alexandra Slater,
Vincent Ingrisano, Sabrina C. Cataudella, and Cristina Pitter
The Talkback after Gi60 Theatre Festival on Film is located on a separate 'button', listed below the link to the films as a "Bonus" - the talkback starts at 6:04 on the timeline, and lasts for approximately 27 minutes.
Thank you for supporting The Tank, NYC, and for supporting Gi60 International One Minute Theatre Festival, now in its 16th year! 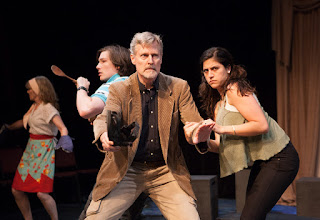 Posted by Rose Burnett Bonczek at 15:15